The Sharing the Joys of Construction Essay Competition was created for Delaware trade and vocational high school students to shine a spotlight on the positive impact diversity has in the architecture, engineering, and construction (AEC) industry. Students wrote about individuals who have inspired them or have had a positive impact on the built environment. First place winners Aa’khai Hollis and Rocio Garduno-Castaneda won a $500 prize, runner ups Sydney Marie Luckey and Dallas Jerome Dixon received $300. Rocio would like to thank all her friends for supporting and reassuring her. 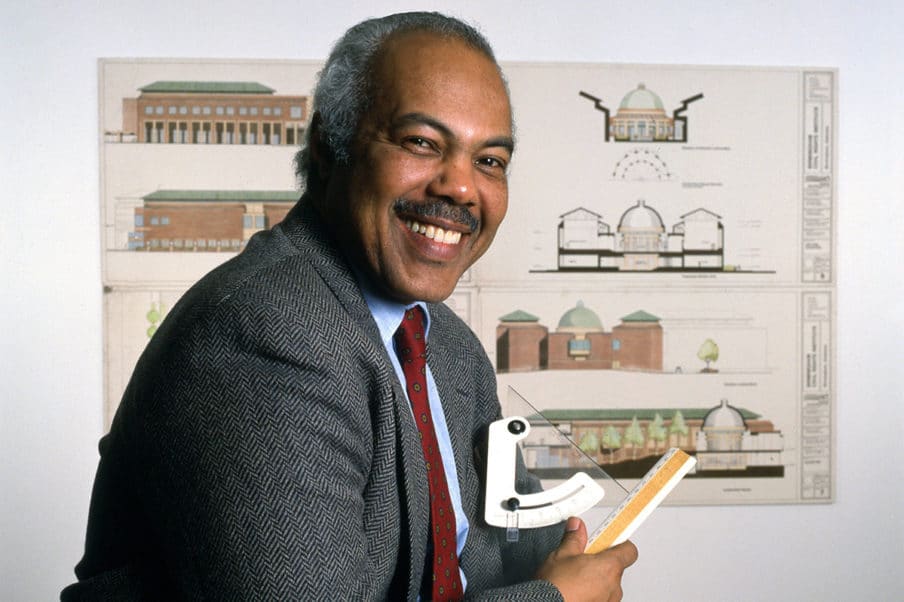 I’ve always believed that our purpose is embedded deep within us, flames of motive sparked by inspiration. J. Max Bond, Jr.’s fire was ignited from the mere sights of Tuskegee Institute’s architectural designs. Bond’s inspiration drove him through the path of vast and sublime accomplishments. In 2011, a new center was to be located within the Spitzer School of Architecture. The Board of Trustees of the City College of New York had approved of this significant center, for it was named after the brilliant architect J. Max Bond Jr.

Bond was born in 1935 in Louisville, Kentucky, to a family of activism and higher education. His father, J. Max Bond Sr., served the President of the University of Liberia in the 1950’s as an academic. His mother, Ruth Clement Bond, was a prominent teacher, quilter and most importantly, civil leader. At the age of 15, Bond enrolled at Harvard University where he obtained his Bachelor’s and Master’s degree through 1988. The scarcity of African American Architects had a great impact on his career. Colleagues and educators made an effort to demoralize and cripple his dreams. None of the negative feedback could accomplish a hit. J. Max Bond Jr. was like a goldfish among sharks, but no matter how big and scary, he just kept swimming.

In 1958, the bright architect studied abroad in Paris, France after receiving a Fulbright scholarship. Bond’s career relocated him to Ghana, Africa. Here he worked on government initiatives and developed his beliefs that architecture should strive to embody humanistic features. During his stay, he created some of his first landmarks of architecture. The most memorable was the design of the Bolgatanga Regional Library.

Upon his return to New York, he was ready to inflict positive change to the populace. Bond initiated the Architects Renewal Committee of Harlem. He had good morals and a course of action to give back to the people of the community. The organization planned to support and benefit residents by uplifting their voice. Following this project Bond and Donald P. Ryder collaborated together to create a monumental practice, Bond Ryder & Associates. A prominent project design coming from the firm was the Martin Luther King Jr. Center for Nonviolent Social Change. Later on, the firm was awarded to design the National Museum of African American History and Culture in the National Mall, New York. The award elated and compelled Bond with satisfaction for where his successful career had led him to.

J. Max Bond Jr. actively advocated for civil rights and education with projects such as the Schomburg Center for Research in Black Culture and the Birmingham Civil Rights Institute, as well as the ones already mentioned. In 1987, he received the Whitney M. Young Jr. Award in recognition of architects or practices that embody social responsibility and address issues from affordable housing to universal access.

Not only did he support his entire community, but stood with the black minorities. During this time period there was a scanty number of African Americans who pursued a career they were passionate about, especially if it was dominantly white. Being such a prosperous African American Architect inspired many. Not limited to physical buildings, Bond built motivation in others.

It isn’t just one person, one dream, or one company that has contributed to building our surrounding structures and communities. It is an abundance of people like J. Max Bond Jr., who have devoted themselves to develop what we look around and see today.

In honor of Black History Month I would like to give a sincere thank you to every African American architect, engineer, designer, construction worker, and more. Without their diligent contribution we would not have been able to advance this efficiently and far. I hope to see more minorities prosper in the future and once again, a great appreciation and thank you goes out to these hard working people.