It is with great sadness that we mark the passing of Joe Pedicone Jr. on March 15, 2021. As a tribute, we revisit this EDiS Inside article from 2018. Thoughts and prayers are with our Pedicone family.

You could say that the DiSabatino’s story in America started with the Pedicones: it was the great-great uncle of our own Joe Pedicone III, Luigi Pedicone, along with Joe’s great-grandmother’s brother, Joseph, who sponsored the DiSabatino’s relocation from Italy in the beginning of the Century. Joe’s great-grandfather, Arpino Pedicone, was the first generation to work for EDiS. He went on to have 10 children, four of whom became the second generation of Pedicones at EDiS — the third generation were his grandchildren. Joe Pedicone III represents the fourth generation, meaning the relationship between the two families has lasted more than 100 years. 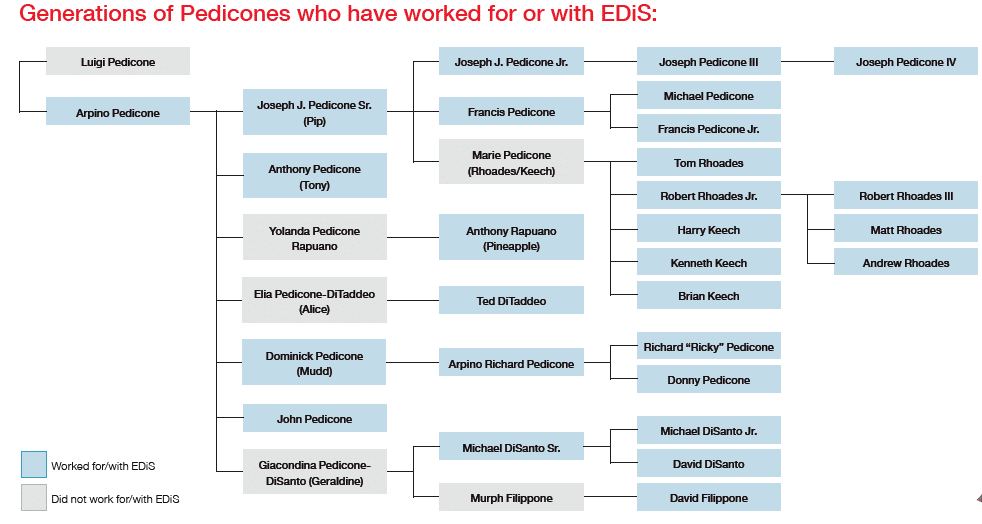 In 2018 we officially welcomed the fifth generation of the Pedicone clan to our EDiS Family — Joseph Pedicone IV had joined EDiS as an Interiors/Service Superintendent. His arrival marked the continuation of the tradition and legacy established in 113 years of service to EDiS clients and the Wilmington community.

Melissa Rysak is the Director of Marketing & Business Development Support for EDiS Company.